OVATION PRODUCTIONS proudly announces its new theater offering to all musical theater fans with “SISTER ACT,” a hilarious, feel-good musical straight from Broadway, New York as it plays beginning June 27 – July 9 at the Theatre at
Solaire.

Based on the mega-hit film from the 1990s, SISTER ACT will be performed in Manila for the first time on a limited two-week run and promises the audience to groove to the original score with music by 8-time Oscar Academy, Grammy and Golden Globe Award-winning composer Alan Menken (Disney’s Alladin, Beauty and the Beast, Newsies, The Little Mermaid, Enchanted, Little Shop of Horrors), with its vast inspiration of musical styles from Motown, soul and funk to great big disco anthems.

SISTER ACT tells the story of a wannabe disco diva Deloris Van Cartier whose life takes a surprising turn when she witnesses a murder, and is put into protective custody in the one place the police are sure she won’t be found – a convent! Disguised as a nun, she finds herself at odds with both the rigid lifestyle and an uptight Mother Superior. Using her fabulous disco vibe and killer voice to inspire the choir, Deloris breathes new life into the church, but in doing so, blows her cover. Deloris helps her fellow sisters find their voices as she unexpectedly rediscovers her own. A sparkling tribute to the universal power of friendship,
SISTER ACT is reason to rejoice!

“To hear people laugh and cheer the way they do at SISTER ACT — a show
people think they know but are pleasantly surprised to discover is not what they are expecting — is a magical experience for a producer,” says Producer Whoopi Goldberg, who also played the lead role of Deloris in the 1992 Hollywood blockbuster.

For the Manila production, the cast of SISTER ACT are as follows:

DENÉ HILL – Deloris Van Cartier, a powerhouse disco diva wannabe with a
dream of Donna Summer-esque glory. Mouthy, ballsy, brassy and quick on the
quip. She has no faith in anything but herself.

REBECCA MASON-WYGAL – Mother Superior, an old-school Catholic mother superior with a spine of steel, a will of iron, and an acid tongue, but underneath a hidden heart.

BRANDON GODFREY – Curtis Shank, a super cool, super confident, smooth bad guy with soul. He is a tough narcissist with sex appeal, and charisma. He is elegant and dangerous.

WILL T. TRAVIS – Lt. Eddie Souther, a desk cop. He is charming, appealing and straight forward. He imagines himself as hip and sexy in the ‘dream’
sequence.

JARRED BEDGOOD – TJ, an undersized or oversized overeager young man
with comic chops. He is the nephew of Curtis who is well-intended, but doesn’t
always have the brain power to think ahead.

MOSES BERNAL – Pablo, a comic and Curtis’ bodyguard who keeps
mouthing off in Spanish.

SOPHIE KIM – Sister Mary Robert, a young timid novitiate who is torn
whether to take her final vows or leave the convent to rejoin the world that
intimidates her so. Her shy personality masks a huge, show stopping powerful
singing voice.

EMMA BROCK – Sister Mary Patrick, an upbeat, fun and the eternal optimist who is filled with love and delight in God, and friendship. A comic, she is always the head cheerleader ready for an adventure, a life experience, or between meal-time snack.

NANCY EVANS – Sister Mary Lazarus, a tough, full of vim and humor, with twice the energy of anyone half her age. She’s quick on the wisecracks and always ready to roll up her sleeves and dig in.

HARRY McENERNY – Joey Finnochio, a big, burly, and fiercely loyal comic. He fancies himself as a guy women cannot resist.

The other cast members are as follows: 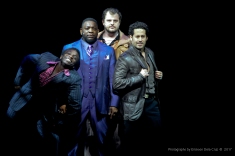 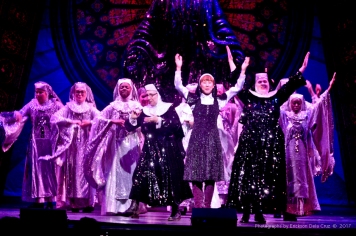 WHAT THE CRITICS HAVE TO SAY:

Elisabeth Vincentelli of The New York Post calls SISTER ACT, “One of the season’s happiest surprises! Off the chart and packed with goodies, to which we say: Amen!

Joe Dziemianowicz of The New York Daily News raves “A blessed event has landed on Broadway. Sister Act is a feel-good crowd pleasure worth celebrating. It keeps on purring from one happy moment to the next.”

Charles Isherwoood of The New York Times says, “When the wimples start quivering and the nuns start rocking to raise the Gothic rafters, all’s right in the kingdom of musical comedy!”

Mark Kennedy of The Associated Press calls SISTER ACT, “In a word, divine. This is a musical that hits all of the right spots, achieving something close to Broadway grace. It will convert you.”

SISTER ACT has been seen by more than 6 million people worldwide and with its powerful gospel music, outrageous dancing and a truly moving story, Sister Act will leave audiences breathless.

The performance schedules of SISTER ACT are as follows:

Duration: Two hours and 30 minutes. With one 15-minute intermission.