“ANG SIKRETO NG PISO” (The Secret of the Philippine Peso Coin) is a upcoming family-oriented comedy and historical film inspired by actual events on the smuggle of the Philippine peso coin in 2006. Written and directed by stage, TV and film actor-turned-director Perry Escaño, who is also one of the nine finalists of the main competition of full-length films for the 13th Cinemalaya Philippine Independent Film Festival for his “Ang Guro Kong Di Marunong Magbasa.”

The film is a wholesome, charming, and interesting story for the Filipino family during Christmas season, and thus, it is humbly intended for submission to the 2017 Metro Manila Film Festival.
The main plot is about love of family and supporting one another whenever trials in life happen.

Topbilled by Quezon City Congressman and actor Alfred Vargas (fresh from the success of Encantadia of GMA), the film is Alfred’s second collaboration with Direk Perry since the former is also the lead actor of the said Cinemalaya action-drama entry, slated this August 2017.
Having been in the business for more than 15 years, Alfred has done a number of lead roles in GMA teleseryes and various independent films.
“It’s a breather for me as actor to do a family comedy film this time.
“We are hopeful to get a slot to this year’s MMFF with this comedy movie. It’s our gift for all Filipino families during Christmas season,” says Alfred.
With major roles in the film are multi-talented ace comedian Joey Marquez (regular cast of My Dear Heart of ABS-CBN), the still debonair
and handsome Wendell Ramos, and the cute child actor and Downy commercial model Yuan Francisco.
Also in the cast are funny comedians Paul Sy (mainstay of Home Sweetie Home of ABS-CBN as John Lloyd Cruz’s buddy, and a winner of Showtime’s “Look A Like” as Wally Walley), Long Mejia (a regular cast of FPJ’s “Ang Probinsiyano” of ABS-CBN), and Beverly Salviejo (a veteran comedienne and singer).

Then there’s Lou Veloso (versatile and award-winning actor), Andoy Ranay (stage, television, and theater actor and director), Ernie Garcia (a seasoned actor who has done more than 50 films and is also the Supervising Producer of “Ang Sikreto ng Piso”), and more. 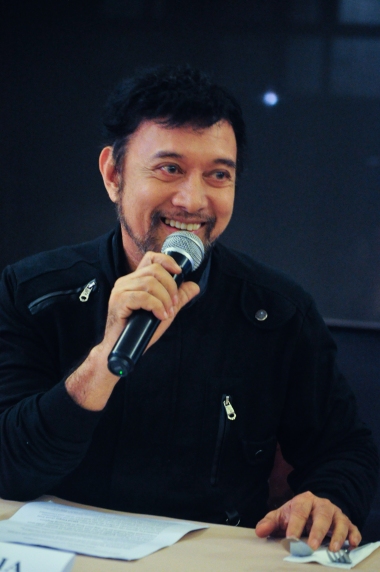 The production is also aiming for McCoy de Leon as Alfred’s brother in the story, and Elisse Joson as the beautiful daughter of Joey in the film.
As of press time, the production team is now negotiating with award-winning actress Judy Ann Santos for the role of the wife of Ronnie (Alfred) in the story.
“Ang Sikreto Ng Piso” is produced by MPJ Entertainment Productions and JPP Entertainment, owned by beauty queen and fashion designer Joyce Peña Pilarsky, who also portrays Joey’s strict wife in the movie.
To start filming this July, other cast members of the movie include Dexter Doria, Garry Lim, Joanna Marie Tan, Kelvin Miranda and Akihiro Blanco.

SYNOPSIS:
In order to build wealth effectively, we have to watch out on our spending. Ronnie (Alfred Vargas) has to make sacrifices to save up for the future of his wife (to be announced) and only son Taballero (Yuan Francisco).
Ronnie is forced to accept an odd job that promises higher income — one that requires him to gather as much one-peso coins has he could.
It is only a matter of time when he discovers why these coins are being smuggled abroad. What secrets do these coins hold? Can these coins help Ronnie save the life of his son who lies in agony in the hospital?
CAST OF CHARACTERS:
RONNIE BIGLANG-AWA (Alfred Vargas) – A kind man and loving father who lives in a frugal way. Worries about the future of his son Taballero. He gathers Philippine peso coins for a Chinese businessman to earn extra money. Discovers the rampant smuggling of coins from the Philippines to other countries.
JUANA BIGLANG-AWA (To be announced; production is negotiating with Judy Ann Santos) – wife of Ronnie who owns a money changer shop.
BABE GUEVARRA (Joey Marquez) — A funny and sweet businessman, owner of a junkshop and one of the main competitors of the Biglang-Awa family
TABALLERO BIGLANG-AWA (Yuan Francisco) – A 9-year-old son of Ronnie and Juana. Chubby and cute, loves to eat fatty food, keeps his money in a piggy bank, importunate but interesting kid.
RODRIGO SANTOS (Wendell Ramos) — A handsome conman who pretends to be a rich businessman, and the head of a crime syndicate. A frequent client at Juana’s money changer shop.
TATANG TANO BIGLANG-AWA (Lou Veloso) — in his early 70’s. Foster father of Ronnie who owns a plastic-metal-scrap business in the town of Balbago. Has a large collection of vintage one peso coins.
DONG MARCOS (Ernie Garcia) — father of Juana Marcos Biglang-Awa (lead actress)
ANDAY (Andoy Ranay) — Juana’s gay co-worker and closest friend who has a big crush on Rodrigo. He imagines that he is a real transgender and is planning to undergo vaginal transplant.
CHRIS SINGSON (Paul Sy) — Extremely fat, looks funny but is a serious person. Behaves and talks like a military man, a classmate and good friend of Taballero in Grade 2.
PANDAY CARMONA (Long Mejia) — Helper of Tatang Tano, thin, fond of wearing dark eyeglasses. Speaks in a loud voice and always startles people.
MANANG CHE (Beverly Salviejo) — A sari-sari store owner in Balbago, knows all the gossips about the people living in the community.
For more information, Visit Facebook Fan Page:
“Ang Sikreto ng Piso”, The Secret of Philippine Peso Coin